On Friday in the Western District of Texas, Cub Club Investment, LLC  (CCI) filed a complaint against Apple for copyright infringement and trade dress infringement, regarding the plaintiff’s five skin tones for emojis, which Apple purportedly copied without permission or a license.

“Emoji(s) are digital images or icons used to express an idea or emotion to the sender.” According to the complaint, the plaintiff developed the iDiversicons® Emoji, a “diverse emoji” aiming to represent a variety of people. iDiversicons emoji were launched and released on the Apple App Store in October 2013 and on Apple iTunes in December 2014. The plaintiff claimed that it has registered copyrights “covering emoji with five skin tones,” and adding gendered emojis, among others. The plaintiff joined the Unicode Consortium in November 2013 to make these emojis and technology available to consumers. According to the complaint, the “designs of iDiversicons® emoji have distinctive and non-functional features that identify to consumers that the origin of the iDiversicons® emoji is CCI.” Furthermore, CCI asserted that it “owns trade dress rights in the designs and appearances of the iDiversicons® emoji,” which includes the different shades for the emojis. 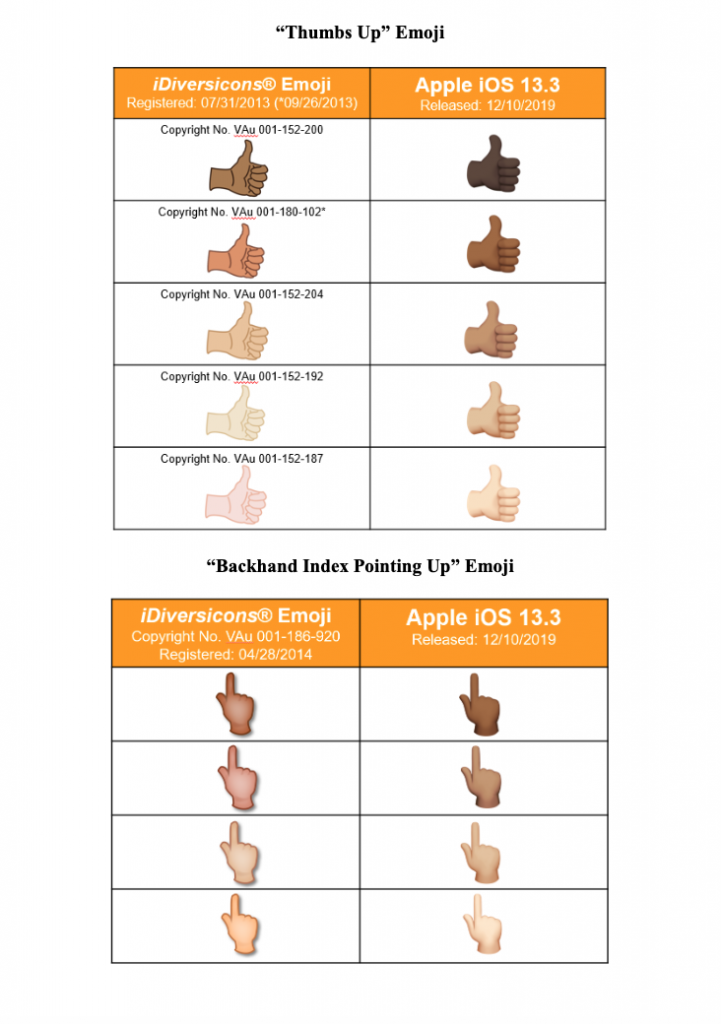 Image captured from pages 12 and 13 of the plaintiff’s complaint, via Docket Alarm.

The plaintiff claimed that the aforementioned conduct has caused a decrease in revenue for CCI because Apple users can access Apple’s diverse emojis on “the default Apple keyboard.” Consequently, CCI averred that it has been harmed by Apple’s alleged conduct. Apple is accused of copyright infringement, trade dress infringement, false designation of origin, unfair competition, misappropriation, and unjust enrichment in violation of the Copyright Act, the Lanham Act, Texas Business & Commerce Code, and state common law.

The plaintiff has sought declaratory judgment in its favor, to enjoin Apple from further infringement, a permanent injunction, a full and complete accounting for the defendant’s profits, gains, advantages received from its alleged infringement, and an award for damages.