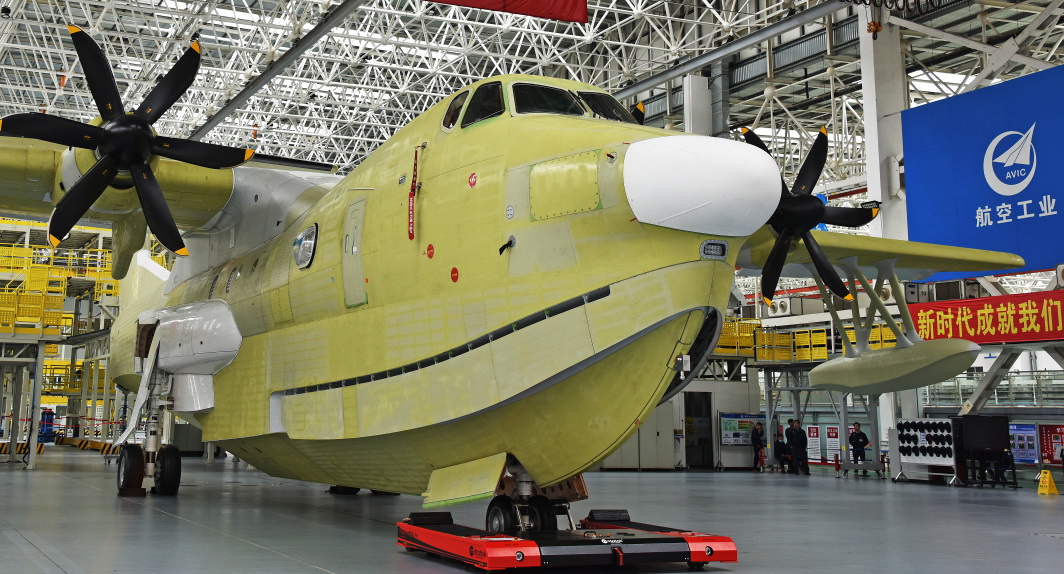 China is stepping up development of the homegrown AG600 large amphibious aircraft, the company developing the plane said on Wednesday.

Three AG600s are expected to enter the final phase of assembly this year and maiden flights are planned for three aircraft, Aviation Industry Corporation of China, the country's leading plane-maker, said.

AVIC is pushing ahead with the AG600 project, which is designed to strengthen the country's emergency rescue and natural disaster response systems.

Code-named Kunlong, the AG600 is a key piece of aeronautical equipment in China's emergency response system. Together with the Y-20 large transporter and the C919 single-aisle passenger airplane, it is also part of a key project to independently develop a "large aircraft family".

The AG600 has been developed by AVIC to meet the needs of firefighting and marine rescue missions, as well as other critical emergency response operations.

AVIC said that as one of the biggest large amphibious aircraft being developed worldwide, work on the AG600 involves high standards and diverse tests due to its complicated missions and working conditions.

It is designed to operate in complex weather and environmental conditions. During rescue missions, it can conduct low-altitude water surface searches and can act as an anchor during water and maritime rescue missions. The aircraft is capable of rescuing up to 50 people on a single mission.

AVIC has completed three prototypes, with the first undergoing test flights and the second in static testing.

At Airshow China 2021 in Zhuhai, Guangdong province, late last year, an AG600 aircraft performed an aerial water drop and displayed its firefighting capabilities to the public.

The third AG600 prototype rolled off the production line in Zhuhai in December. Made purposely for test flights, it is now undergoing preparatory ground tests, AVIC said.

Aircraft production, static and ground tests, and other work are progressing smoothly at AVIC branches across the country, it said.