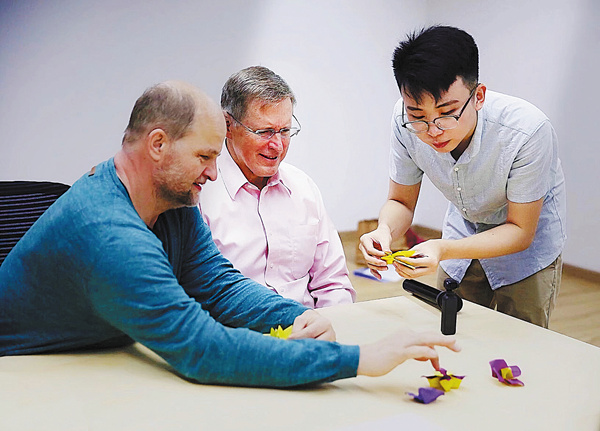 Pei Haozheng instructs Christoph Reinhardt (left) and Stephen Brady on the intricacies of origami. Reinhardt is the great-grandson of German businessman John Rabe, often described as China's Oskar Schindler. Brady is a relative of US doctor Richard Freeman Brady, who helped to set up a protection zone during the Nanjing Massacre in 1937.[Photo provided to China Daily]

A single sheet of paper, in origami artist Pei Haozheng's eyes, has infinite possibilities. It can be folded into anything, from daily objects to mythical creatures, with imagination the only limit.

"The charm of origami lies in its creativity from a single square paper through just folding with no cuts or glue," says the 25-year-old.

He completed hundreds of lifelike models-mostly his original creations instead of copies of other artists' designs-and won the International Origami Internet Olympiad in 2017, combining the art's simplicity with Chinese cultural ideas. For the event's final task, Pei folded an ancient Chinese woman holding a mirror from a sheet of handmade xuanzhi (rice paper), which impressed judges with its exquisite shape and Eastern style.

Launched by Russian origami master Andrey Ermakov in 2011, the event is seen by many artists worldwide as the ultimate challenge to prove their origami skills. In 2018, Pei was invited to be the event's task designer. His work Bailuyuan ("white deer plain") was selected as the edition's logo and mascot. Origami is the Japanese art of folding paper into representational shapes. During the 20th century, Japanese artist Akira Yoshizawa (1911-2005), regarded as the father of modern origami, helped to raise the ancient art of paper-folding from a craft to an art form and made it known to the world.

Some studies claim its roots may be in China, where paper was invented during the Western Han Dynasty (206 BC-AD 24). Although origami is a minor art form in China, it has attracted young artists like Pei. The number of Chinese semifinalists in the International Origami Internet Olympiad increased from 13 in 2011 to 130 in 2018. Due to the COVID-19 pandemic, the 2019 and 2020 editions were canceled. The 2021 edition is ongoing.

"It is good to see that more people are interested in the art form, but only those with a real passion for origami will make it into a lifelong career," Pei says.

As an origami artist, Pei describes himself as a man with a mission-to tell the Chinese story through his paper-based language. His paper art reflects the reality. Inspired by the story behind Zijin Grass, or Orychophragmus violaceus, which is dubbed as the "flower of peace", he has created the purple flower models to pay tribute to the victims of the Nanjing Massacre in 1937. The models are in the collection of the Memorial Hall of the Victims in Nanjing Massacre by Japanese Invaders in Jiangsu province. 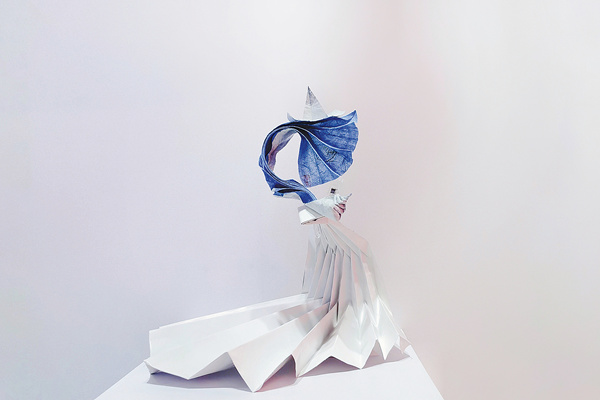 To celebrate the 100th anniversary of the founding of the Communist Party of China this year, the artist created an origami piece titled Yuanhang Bainian ("100 years of sailing"). The work features a boat riding the wind and cresting the waves.

"The boat symbolizes not only the Red Boat on Nanhu Lake, where the first National Congress of the CPC was concluded 100 years ago, but also today's vibrant society," Pei says.

Born in 1996 in Nanjing, Jiangsu province, Pei started folding paper when he was in kindergarten, because paper was cheap and easy to get. At first, he learned folding from teachers and parents, and later he copied the patterns from books. From cranes to planes and fortunetellers, he was fascinated by the "magic world made by paper". Every day, he spent hours folding paper.

Getting better with his folds, he wanted to explore more origami techniques and skills. In early 2007, he came across a diagram with hundreds of patterned lines designed by Robert Lang, an origami master from the United States. It was mind-blowing for Pei, opening a new world of the craft. With no one to consult, Pei taught himself through origami theory books, such as Origami Design Secrets by Lang. As the quantity of his work grew, so did the variety and quality. His efforts paid off and during the senior middle school period, Pei began to create unique designs.

Pei once spent a year designing and creating a 60-centimeter-tall work featuring an angel with six wings folded from a 2-meter-long square sheet of paper. It took him numerous attempts to get everything right.

In 2016, then a sophomore at the Huazhong Agricultural University in Wuhan, Hubei province, Pei won a bronze prize at the International Origami Internet Olympiad. The next year, he became the champion in the competition.

In 2017 and 2018, Pei was invited to attend the Chinese version of Super Brain, a competitive reality show on Jiangsu Satellite TV. The show gave him an opportunity to meet Lang, both as judges for the show. Pei made 20 paper models for display there and Lang praised his techniques, Pei says.

Half a year after the meeting, Pei took up the challenge of creating a solar panel in origami style at Forward to the Future, a science show on China Central Television. He successfully built the panel that folds up to 1 square meter-while unfolded, it becomes a structure of 81 square meters. 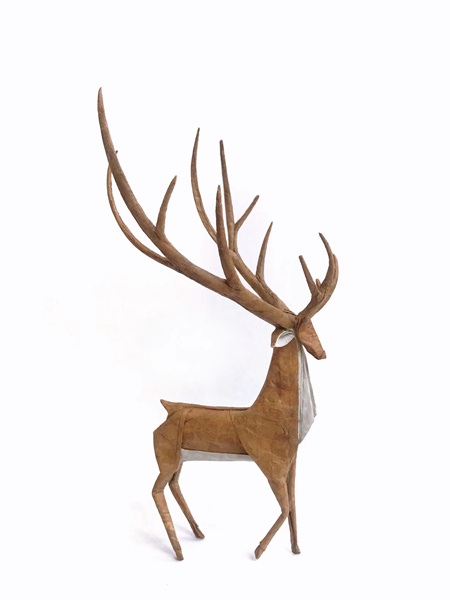 Pei got his master's degree in science from the Nanyang Technological University in Singapore earlier this year. He has returned to China, setting up his own workshop in Nanjing.

"For me, origami is not just a craft, but an art that can deliver culture and last forever," Pei says.