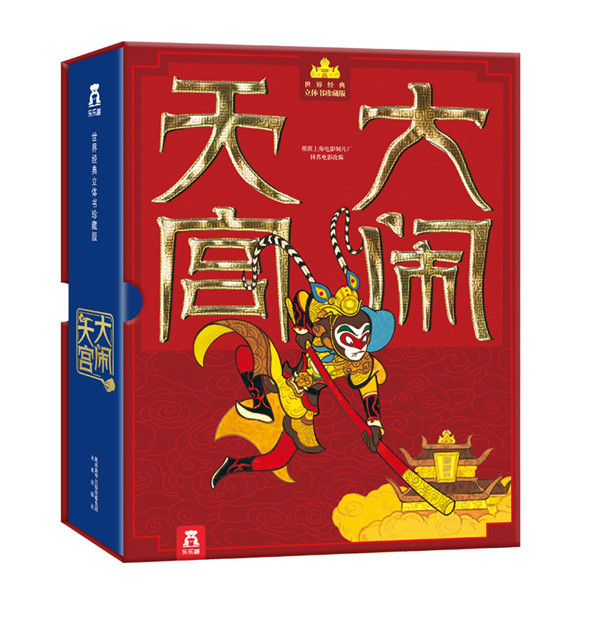 Havoc in Heaven, the first large pop-up book inspired by Journey to the West, hits the shelves. Mei Jia reports.

A work that embodies the spirit of craftsmanship, Havoc in Heaven is the first large pop-up book that has the much-loved Monkey King story from an ancient Chinese classic going 3-D on paper.

The book, which has been on the market since November, is not only being appreciated by young Chinese readers who see the book at fairs or other events, but it is also gaining attention and copyright requests from publishers overseas.

Alizee Dabert, the foreign rights manager at Gallimard Jeunesse and the publisher of the pop-up Le Petit Prince, says she is very optimistic about the global market potential of the pop-up version of Journey to the West.

"It's a well-known and important story, popular among Chinese kids as well as adults. And its paper-art design is remarkable," says Dabert.

The book features six scenes from the story－including the birth of the Monkey King from a rock, his enthronement as the leader of the monkeys and his combat with the emperor of heaven.

The latest publication is based on an award-winning cartoon film released by Shanghai Animation Film Studio in 1964. The book was published after Xi'an-based Lelequ, a pop-up book brand under the Ronshin Group, won the adaptation rights in 2014.

The publisher spent two years working with a team of 10 to turn more than 70,000 paintings and pictures into the 300 components that the book comprises.

"We did more than 2,000 revisions to create the beautiful and intricate pop-ups. Sometimes we were so exhausted that we wanted to drop the project, but we persisted," says Sun Zhaozhi, the book designer and deputy general manager of the group. Sun also says the scene which shows a battle with an army from heaven took the team half a year to complete.

Yan Dingxian, the brain behind the image of the Monkey King in the cartoon film, said at an event in Shanghai in November that he had gone to the Peking Opera for inspiration to create it.

Speaking about Lelequ's effort to pay tribute to tradition and carry it forward in a form that is both innovative and appealing to readers, Yan Hongbing, 49, the paper-art designer of many of Lelequ's books over the past decade, says he had always wanted to make an original version of the Monkey King－a character he has loved since childhood－after he saw a pop-up version of Alice's Adventures in Wonderland in 2003.

"Then (in 2003), I was amazed by the way the content became vivid with the characters bouncing around, but I soon realized that in our literary tradition there are many stories that are suitable to be turned into such books－with strong characters, grand scenes and dramatic conflicts," says Yan.

In the book, there is a scene where the Monkey King retrieves his legendary weapon－the golden cudgel－from the East Sea Dragon King's palace.

As the story unfolds over the pages, the cudgel bounces up to a height of around 40 centimeters. 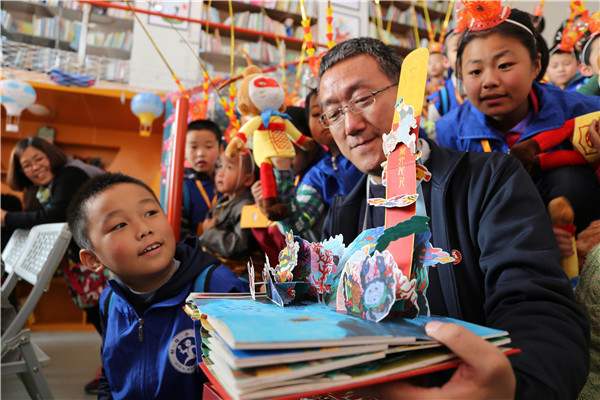 Yan Hongbing, the paper-art designer of the book, with children at a promotional event in Xi'an. [Photo provided to China Daily]

Explaining how he achieved this, Yan says: "This is a detail that I racked my brain to get right. I studied many books, made as many models as I could, and finally I devised a technique called 'secondary boost'."

Yan also invited illustrator Huang Li and her team from the Taiyang Wa Illustration Studio to help with the book.

Describing her role, Huang says: "Respecting tradition is not simply using ink wash painting or paper-cutting techniques. We traced the religious origin of the story and took images and colors from the Dunhuang frescoes in Gansu province. For instance, the Thunder God's image comes from his Dunhuang prototype."

Huang's colleague Li Chunmiao says due to their research they used only colors like black, gray, yellow, red and indigo that are traditional to Chinese paintings.

Thus the book's seven fairies and clouds are inspired by Dunhuang, but are presented in a contemporary artistic language, says Li.

The illustrations in the book were redone three times after the first samples were produced to get the 3-D effects right.

Essayist Yuan Qiuxiang, who was in charge of writing the story, says the story is told from a global perspective. "The language is colloquial."

Commenting on the book, Lin Wen-Pao, a Taiwan-based Taitung University professor of children's literature, says China bought the copyrights of 4,000 picture books last year, while creating just 2,000 original titles. "But now, we finally have a decent and luxurious pop-up book telling our own story, recreating our history and memories."