On September 2, 2020, the World Intellectual Property Organization (WIPO), in conjunction with Cornell University and INSEAD, released the Global Innovation Index 2020 (GII). China maintained its overall ranking at #14 and was #1 among upper middle-income countries.  China also has 2 of the top 5 ranked science & technology clusters – beating out the United States with Silicon Valley ranked #5.  The GII ranking shows stability at the top but a gradual eastward shift as a group of Asian countries – notably China, India, the Philippines and Viet Nam – have advanced considerably in the GII ranking over the years. 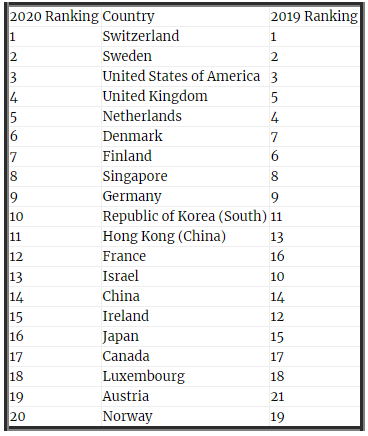 WIPO points out: The geography of innovation continues to shift, the GII 2020 shows. Over the years, India, China, the Philippines, and Viet Nam are the economies with the most significant progress in their GII innovation ranking over time. All four are now in the top 50.

The top-performing economies in the GII are still almost exclusively from the high-income group, with China (14th) remaining the only middle-income economy in the GII top 30. Malaysia (33rd) follows.

India (48th) and the Philippines (50th) make it to the top 50 for the first time. The Philippines achieves its best rank ever—in 2014, it ranked 100th. Heading the lower middle-income group, Viet Nam ranks 42nd for the second consecutive year— from 71st in 2014. Indonesia (85th) joins the top 10 of this group.

China has established itself as an innovation leader, with high ranks in important metrics including patents, utility models, trademarks, industrial designs, and creative goods exports. It boasts 17 of the top science and technology clusters worldwide – with Shenzhen-Hong Kong-Guangzhou and Beijing in the 2nd and 4th spots respectively.