“In two recent design patent cases, two courts were at thesamestage of litigation dealing with thesamedesign patent, yet came to opposite conclusions.”

For most people, what comes to mind when they hear the word “patent” might be an invention like the lightbulb—Thomas Edison’s version rather than Sawyer and Man’s, probably—or the telephone—another hotly-contested invention between Alexander Graham Bell and the lesser-known Elisha Gray. What the average person mightnotbe aware of is the type of patent intended to protect “any new, original, and ornamental design for an article of manufacture.” This is the domain of the design patent, codified in 35 U.S.C. § 171, more than 50 years after patents themselves were established in 1790.See “A Brief History of Design Patents.”

Design patent infringement occurs when a defendant applies a “patented design, or any colorable imitation thereof, to any article of manufacture for the purpose of sale,” 35 U.S.C. § 289, or makes, uses, offers to sell, sells or imports any article of manufacture bearing the patented design under 35 U.S.C. § 271. Traditionally, design patents covered physical designs that had some tangible effect on the shape, or texture of the “article of manufacture.”See, e.g.,Hall v. Bed Bath & Beyond, Inc., 705 F.3d 1357, 1361 (Fed. Cir. 2013);Ethicon Endo-Surgery, Inc. v. Covidien, Inc., 796 F.3d 1312, 1327 (Fed. Cir. 2015). Over time, design patent protection extended to cover screen layouts and graphical user interfaces (“GUIs”).Apple Inc. v. Samsung Electronics Co., 735 F.3d 1352, 1375 (Fed. Cir. 2013), demonstrated the viability of using a design patent to protect a GUI. Apple asserted that Samsung infringed six patents—three design patents and three utility patents. Two of the design patents related to the ornamental design of the physical iPhone, and one design patent focused on the ornamental design of iPhone’s GUI.Id.The design patents played a significant role in Apple’s success on remand, and much of the jaw-dropping$399 million damage awardcan be attributed to design patent infringement. Thus, design patents can be powerful tools which provide protection for even intangible design elements.

But how does one determine whether a design patent has been infringed? Courts rely on the ordinary observer test, which asks if a typical consumer of the accused product, or “ordinary observer,” would find substantial similarities between the patented design and the accused design such that he or she would be deceived into purchasing the accused design believing it is the patented design.Arminak & Assocs. v. Saint-Gobain Calmar, Inc., 501 F.3d 1314, 1321 (Fed. Cir. 2007). In practice, a court will first conduct a side-by-side comparison of the designs.Great Neck Saw Mfrs., Inc. v. Star Asia U.S.A., LLC, 727 F. Supp. 2d 1038, 1052 (W.D. Wash. 2010). Then, the court makes a comparison of the claimed and accused designs in light of the prior art to identify differences that would be significant to an ordinary observer familiar with prior art.Ethicon Endo-Surgery, 796 F.3d at 1335.

Two recent cases are some of the rare examples of a company arguing infringement solely based on GUI design patents. Starting in September 2021, WePay Global Payment, LLC launched suits against 14 defendants, including PayPal and PNC Bank, for design patent infringement by their mobile applications. The cases concern two different outcomes after a Rule 12(b)(6) motion, or “motion to dismiss,” by the defendants.

While courts still employ the “ordinary observer” test at this stage, a plaintiff’s complaint only needs to state a plausible, not necessarily probable, claim to relief.Bell Atl. Corp. v. Twombly, 550 U.S. 544, 548 (2007). For patent infringement cases, in addition to meeting theTwomblyrequirements, the pleadings need to “(i) allege ownership of the patent, (ii) name each defendant, (iii) cite the patent that is allegedly infringed, (iv) state the means by which the defendant allegedly infringes, and (v) point to the sections of the patent law invoked.”Hall, 705 F.3d at 1362 (Fed. Cir. 2013).

The design patent-at-issue, United States Patent No.D930,702(“’702 Patent”), claims an animated design consisting of a series of display screens that one might navigate through in a mobile application­—likely in a financial transaction: 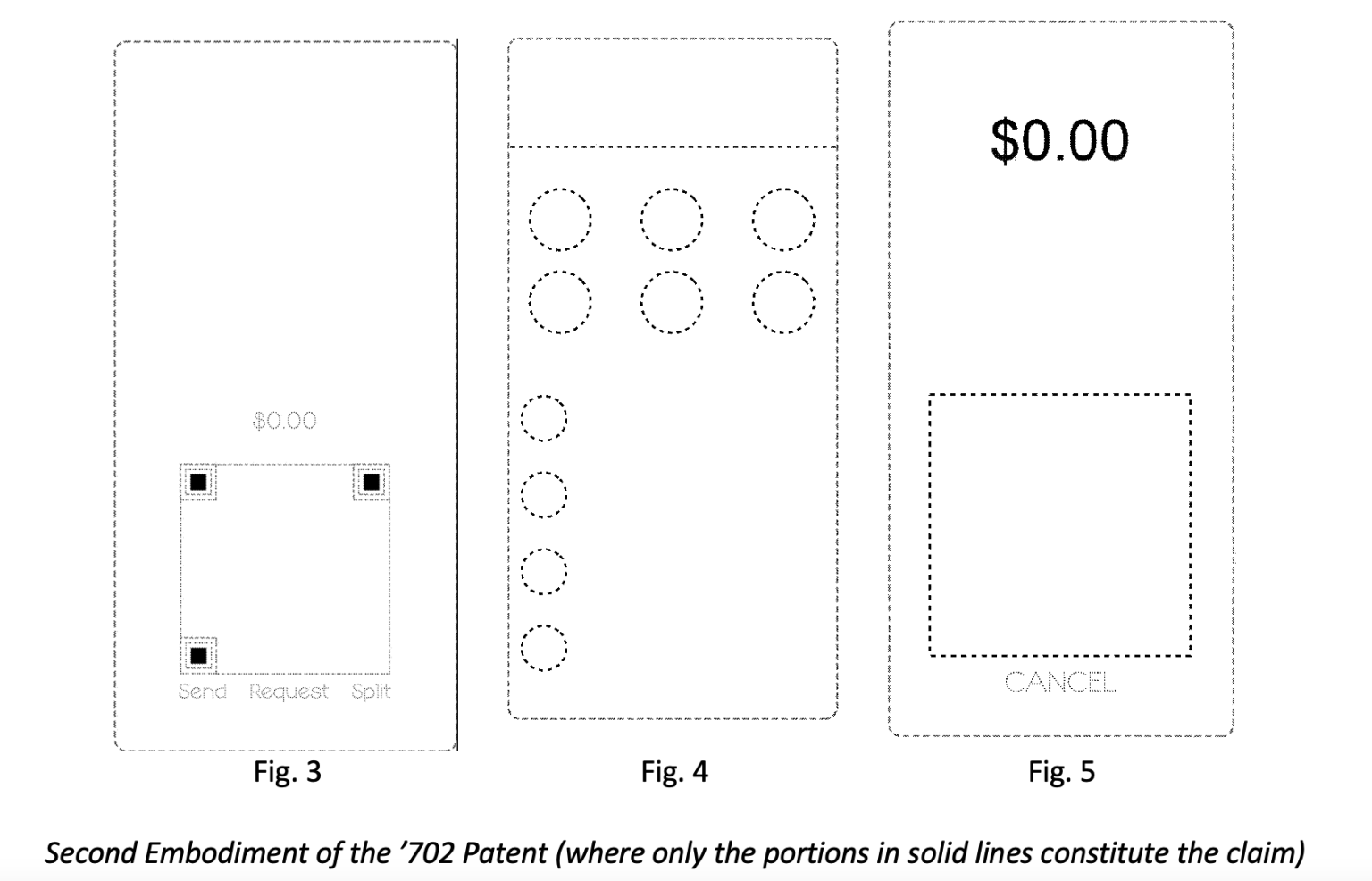 In contrast, eight days earlier, Judge Horan of the Western District of Pennsylvania granted PNC Bank’s motion to dismiss against WePay. Judge Horan held that the dismissal was proper because, “as a matter of law,no reasonable factfinder could find infringement.”WePay Glob. Payments LLC v. PNC Bank N.A., 2022 U.S. Dist. LEXIS 97286, at *6 (W.D. Pa. June 1, 2022) (citingCurver Luxembourg, SARL v. Home Expressions Inc.,No. 2:17-cv-4079-KM-JBC, 2018 WL 340036, at *4 (D.N.J. Jan. 8, 2018)). The court followed the two-step approach. First, a side-by-side comparison of WePay and PNC’s designs demonstrated they were “sufficiently distinct” and “plainly dissimilar” such that no reasonable factfinder could find infringement.Id.at *8. Then, accounting for prior art, any similarity with the accused and asserted designs appeared “like the prior art of a QR code”—an international standard adopted before the filing date of the ‘702 patent.Id. 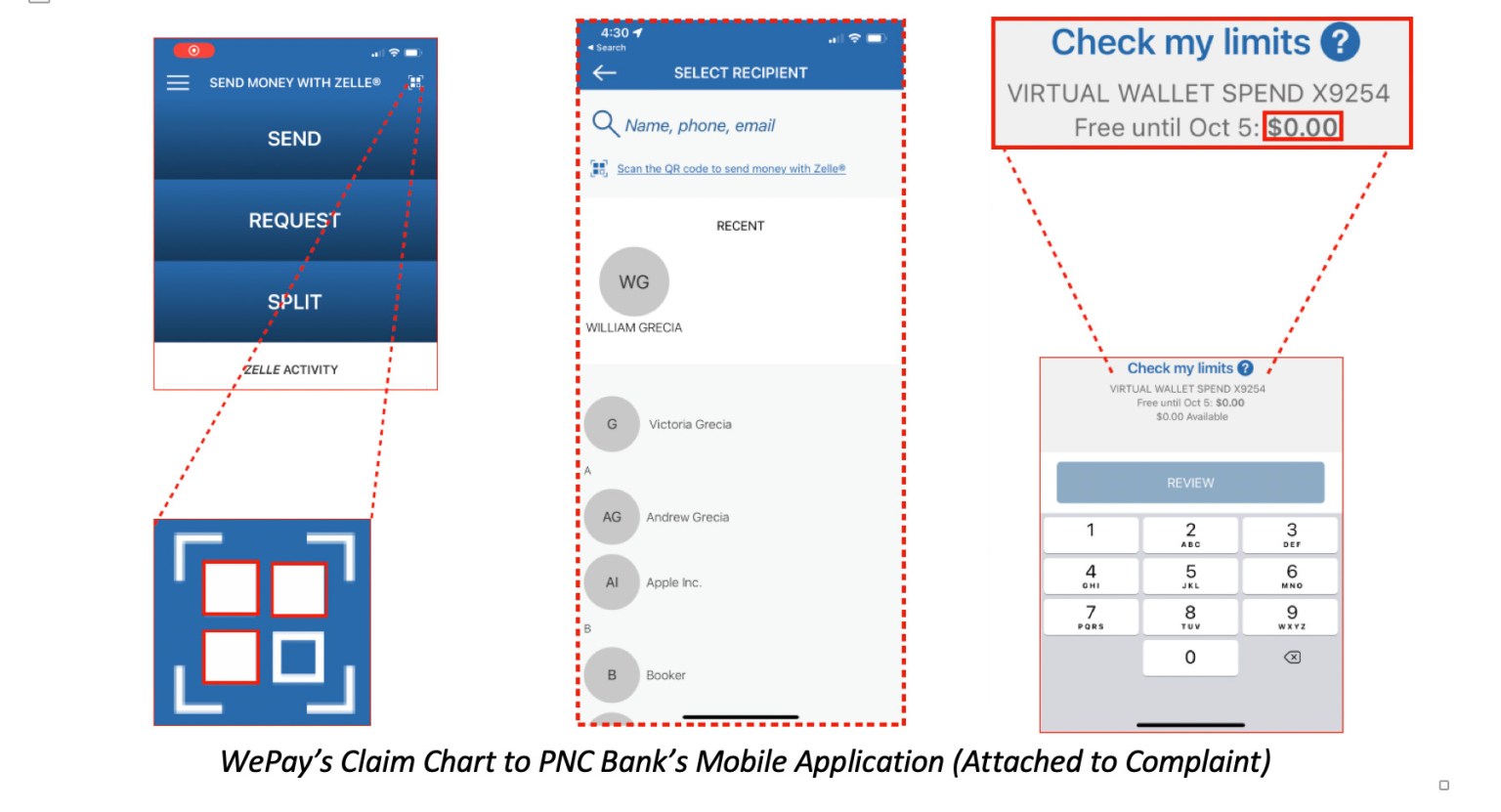 These two courts were at thesamestage of litigation dealing with thesamedesign patent yet come to opposite conclusions. There are some elements in Judge Horan’s opinion that may reveal a difference in approach. First, one of the notable differences in Judge Horan’s reasoning stems from her holding that “no reasonable factfinder could find infringement.”Id.at *6. While Judge Albright’s opinion is brief, it seems that the WDTX either does not evaluate this question or answers it in the negative. This comparison is interesting, because the same patent is being asserted against the same type of infringing article—if no reasonable factfinder could find infringement with the PNC mobile banking application, it is likely the same would be true of PayPal’s mobile application.

What might be a salient takeaway from these two cases? The ordinary observer standard doesn’t seem to have changed (both decisionsreliedon it), however, at least in the Western District of Pennsylvania, visual qualities like similarity of scale and spacing seem to be part of the inquiry at the pleading stage. While this may not last—as of June 27, WePay appealed to the Federal Circuit—for now, other courts may be tempted to grant similar motions to dismiss. It will be interesting to see if the Federal Circuit clarifies this standard on appeal.