The Olympic Winter Games Beijing 2022 will close on February 20 and will be followed by the Paralympic Games, which will be held from March 4 to 13. More than an event, the Games is also for exchanging goodwill and friendship. The design details of various elements such as the medals, emblem, mascots, uniforms, flame lantern and pin badges serve this purpose. Let’s take a look at these Chinese elements through the designs and the ingenious ideas behind them. 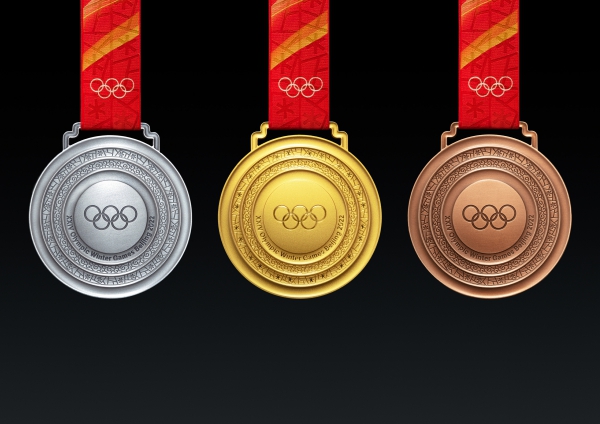 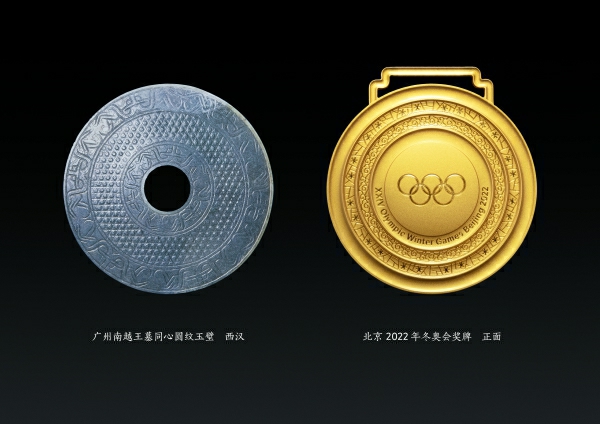 The front side of the Winter Olympic medals was based on the ancient Chinese jade concentric circle pendants, with five rings representing “the unity of heaven and earth and the unity of people's hearts”. The reverse side of the medals was inspired from a piece of Chinese jadeware called "Bi", a double jade disc with a circular hole in the center. There are 24 dots and arcs engraved on the rings of the back side, similar to an ancient astronomical map, which represents the 24th edition of the Olympic Winter Games and symbolizes the vast starry sky, and carries the wish that athletes achieve excellence and shine like stars at the Games.

The Beijing 2022 emblem combines traditional and modern elements of Chinese culture, and embodies the passion and vitality of winter sports.

Inspired by the Chinese character冬for “winter”, the upper part of the emblem resembles a skater and its lower part a skier. The ribbon-like motif in between symbolizes the host country’s rolling mountains, Games venues, ski courses and skating rinks. It also indicates that the Games coincide with the celebrations of the Chinese New Year.

The blue color in the emblem represents dreams, the future and the purity of ice and snow, while red and yellow – the colors of China’s national flag – present passion, youth and vitality. 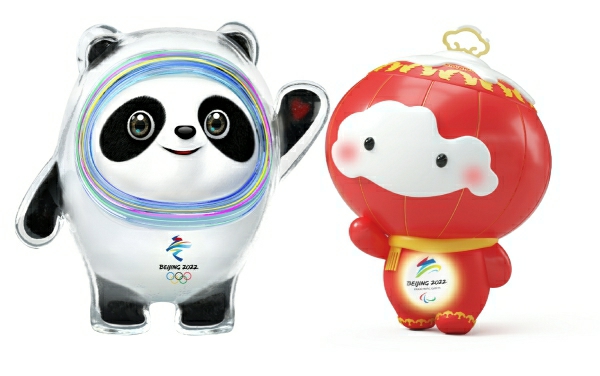 Bing Dwen Dwen, the cute mascot of the Olympic Winter Games Beijing 2022, captures attention with the panda’s full-body "shell" made out of ice. The inspiration came from traditional Chinese snack "ice-sugar gourd," (tanghulu), while the shell also resembles a space suit – embracing new technologies for a future of infinite possibilities. “Bing” is the Chinese character for ice, which symbolizes purity and toughness, in line with the spirit of the Olympics. Dwen Dwen (墩墩) is a common nickname in China for children that suggests health and ingenuity.

The mascot for Beijing 2022 Paralympic Games is Shuey Rhon Rhon. It resembles an iconic Chinese red lantern commonly seen on doors and streets during Chinese New Year, which in 2022 fell three days before the Olympic Games’ opening ceremony. It is imbued with the meanings of happiness, harvest, affluence and brightness.

Uniforms of the Chinese delegation 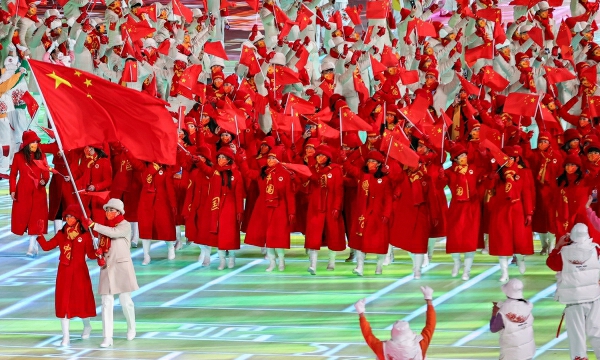 The Chinese delegation wore a set of long cashmere coats with beige for the male team and the traditional red for the female team, with woolen hats that matched their coats. Some athletes also wore red caps with beige coats. They all wore white boots. Their scarves were in the color of China’s national flag, with the Chinese character for "China" woven in yellow on the red background. The color red highlights the warm and festive atmosphere and shows the hospitality of the Chinese people. 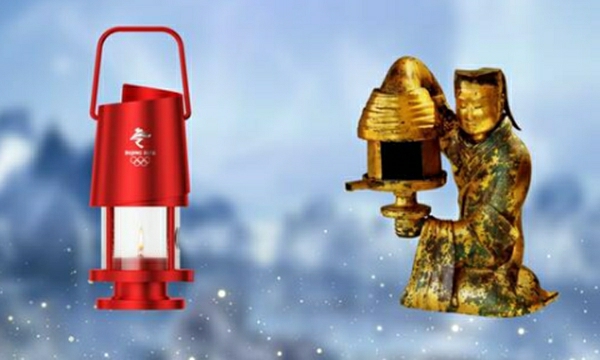 The Olympic flame lantern is in a passionate and encouraging "Chinese red" color, representing the Olympic passion.

In the early 20th century, athletes and sports officials first swapped their lapel pins as a sign of friendship. After the United States beat China 7-5 in a mixed doubles curling match on Feb 5, Fan Suyuan and Ling Zhi presented their American rivals, Christopher Plys and Vicky Persinger, with a set of commemorative pin badges featuring Bing Dwen Dwen, as a symbol of friendship between Chinese and American curlers. The pins have also the functions of commemorating the Games and popularizing the traditional sports culture.

China’s Winter Olympics pins combine traditional Chinese culture and modern aesthetics. The designs have incorporated Chinese myths, 12 Chinese zodiac signs, Chinese cuisine, and four treasures of the study (the ink brush, inkstick, paper and inkstone). The various patterns also include the ancient Chinese games such as cuju (an ancient Chinese style of soccer ball), dragon boat race, and bingxi ("play on ice", a form of performance for the court), which are based on ancient paintings of the Ming and Qing dynasties.