The Belt and Road Initiative refers to the development of the Silk Road Economic Belt and the 21st Century Maritime Silk Road, proposed by President Xi Jinping in 2013.

Government data shows that patent filings to SIPO from 34 out of the 65 core countries in the region increased by 20.8 percent year-onyear to more than 1,600 in the first half of this year.

"The increase reflects the faith the involved countries have in China's market and intellectual property rights protection climate," Gan said at a ceremony last week for the release of a series of reports on IP environments in the countries involved in the initiative.

Last year, SIPO received more than 3,100 patent filings from 41 countries involved in the initiative, including some 2,800 from top 10 sources, which altogether accounted for 90.6 percent of all filings.

Among the countries, Singapore ranked first for its number of filings, followed by Israel and India. Russia and Saudi Arabia took fourth and fifth place respectively.

The lowest 19 countries in terms of filings each posted less than 10 patent applications annually in China.

Also among the top 10 industrial sectors for Chinese patent filings in the region were machinery manufacturing and healthcare.

All of these are priority sectors listed in the "Made in China 2025" policy.

"The data also shows that Chinese companies are accelerating their pace of globalization," Gan said.

Among the Chinese companies exploring opportunities along the Belt and Road routes is ZTE, a Shenzhen-headquartered telecommunications giant.

With 176 applications filed last year, the company ranked second on the list of China's top 10 patent filers in the countries along the routes of the Belt and Road. It was closely after internet service portal Tencent, which reported 180 filings, according to data from SIPO.

However, Guo Xiaoming, ZTE's chief IPR officer, told China Daily in a written response to questions that according to his company's statistics, it has filed more patents in the region. He put the discrepancy in the figures down to the fact that some data has not been publicly disclosed.

Guo said, "Currently, our technological focus in the (Belt and Road) region is on fundamental patents concerning international telecommunications technology standards in such sectors as cloud computing, big data and 5G/4G networks, as well as other core patents related to key technologies in the telecommunications industry."

"Our IP strategy serves the group's businesses worldwide. Some of the countries involved in the Belt and Road Initiative are emerging markets for ZTE's businesses so they are also a priority on the company's global IP landscape," he added.

While China is advancing cooperation in developing infrastructure such as transportation facilities, ZTE is campaigning vigorously for the building of smart cities worldwide and it is deploying IP resources in a variety of sectors including the IT-backed transport network, he said.

Guo also called on companies to implement IP strategies that are tailored to local markets - including trademark registration and patent filing for core technologies - before they look to expand, in order to avert huge IP risks.

Qian Haifeng, legal general counsel at Beiqi Foton, an automobile company headquartered in Beijing, recalled the IP crisis that faced his company in Vietnam about 10 years ago. Its trademark was forestalled because one of its local distributors had already registered it without authorization.

"A trademark is the first step in an overseas IP strategy," Qian said.

Qian added that the company has since increased its overall protection awareness and has experienced few such problems in recent years.

The countries and regions involved in the Belt and Road Initiative account for about 90 percent of the company's sales abroad, with a focus on the markets in Southeast Asia, Africa and the Middle East.

Lyu Wei, director of the Department of Technology and Economy at the Development Research Center of the State Council, said, "Despite a rich diversity of cultures and a wide variety of economic development, the countries involved in the Belt and Road Initiative need technological cooperation and commonly accepted rules for intellectual property protection.

"After all, communication and connectivity are the keys to the initiative." 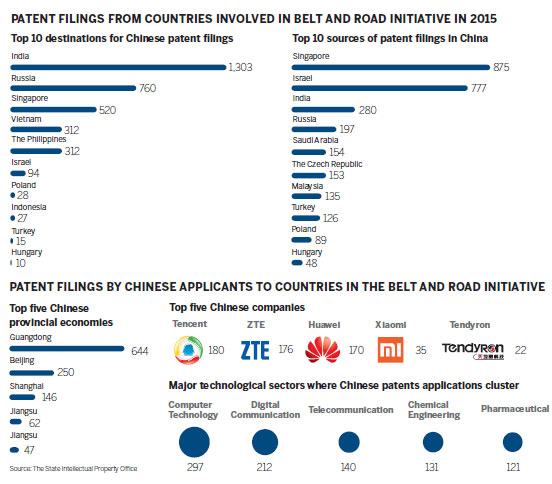