Nike and Warren Lotas have made peace in order to bring an end to their short-but-striking legal battle. On the heels of Nike filing a trademark infringement and dilution lawsuit against Warren Lotas in October for selling lookalike sneaker styles, one of which it marketed as part of a partnership of sorts with longtime Nike collaborator Jeff Staple, counsel for the Beaverton, Oregon-headquartered sportswear giant and the Los Angeles-based streetwear brand told the court that they have “entered into a confidential settlement agreement that calls for final resolution of this dispute.”

Aside from alerting Judge Mark Scarsi of the U.S. District Court for the Central District of California of their out-of-court settlement in the December 11 filing, the parties’ respective counsels  proposed a consent judgment and permanent injunction that, if approved by the court, will prohibit Lotas from infringing Nike’s trademark and trade dress going forward.

Specifically, Warren Lotas will be barred from “manufacturing, transporting, promoting, importing, advertising, publicizing, distributing, offering for sale, or selling any products” that make use of Nike’s trademarks and/or trade dress, including its swoosh logo, “Nike” and “Dunk” word marks, and Dunk silhouette (i.e., “the design of the stitching on the exterior of the shoe, the material panels that form the exterior body of the shoe, the wavy panel on top of the shoe that encompasses the eyelets for the shoe laces, [and] the vertical ridge pattern on the sides of the sole of the shoe, [as well as] the relative position of these elements to each other”), among others.

Moreover, the proposed injunction prohibits Warren Lotas from using “any other marks, names, symbols, or logos which are likely to cause confusion or to cause mistake or to deceive persons into the erroneous belief that any [of its] products … are sponsored or licensed by [Nike],” and also “implying [that it has Nike’s] approval, endorsement, or sponsorship of, or affiliation or connection with, [its] products, services, or commercial activities” when it does not.

And still yet, the injunction means that Lotas may not engage in “any act which is likely to dilute the distinctive quality of the [previously] asserted trademarks and/or injures [Nike’s] business reputation.” 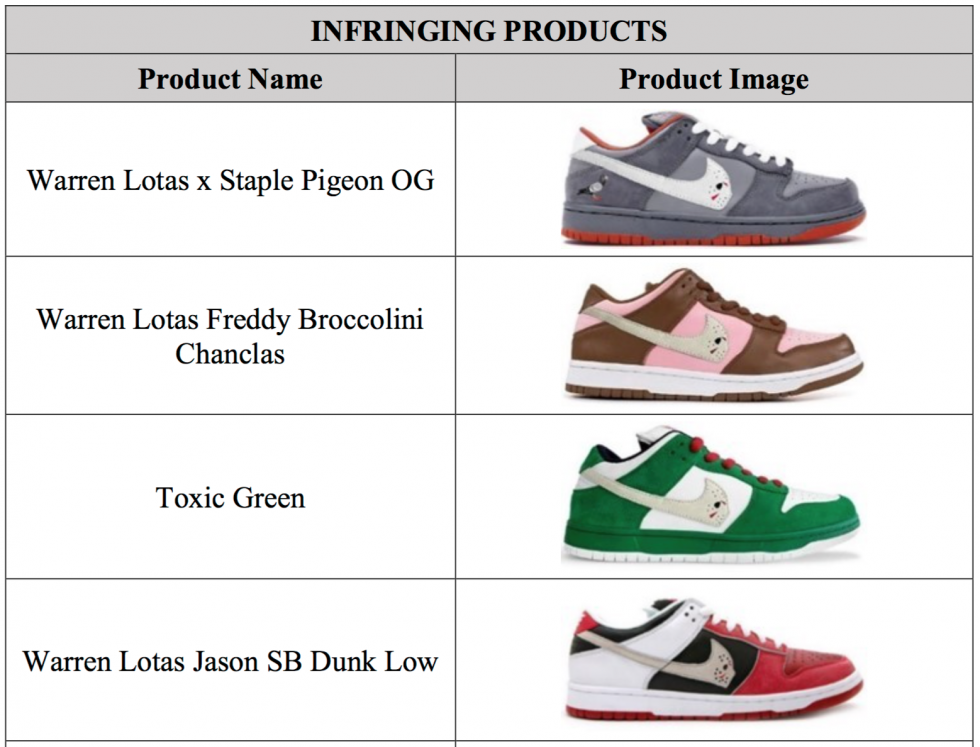 While the proposed judgment and injunction do not make any mention of a monetary settlement (that is likely part of the terms that the parties are keeping under wraps), the filing does order that “judgment is entered against [Warren Lotas]” for infringing and diluting Nike’s trademarks by way of its lookalike sneakers and an array of garments that bear a logo that is confusingly similar to Nike’s swoosh and/or a silhouette that mirrors Nike’s dunk.

Moreover, the judgment explicitly states that Nike’s “asserted marks are valid and enforceable,” thereby, overriding the argument that Warren Lotas made to the contrary in the answer that it filed in early November, in which it asserted that the court should formally invalidate two of Nike’s trademark registrations (no. 3,711,305 and 3,721,064), which respectively cover the body and the sole of the Dunk sneaker.

In connection with one of its affirmative defenses and two of its counterclaims, Warren Lotas took issue with Nike’s rights in those two marks, arguing that “one or more” of the trade dress elements that Nike claims in its Dunk sneaker, “such as the tread on the sole of the shoe, has utilitarian functionality because such trade dress elements are essential to the use and purpose of the sole and/or affect the cost and/or quality of the sole,” and thus, are not valid trade dress rights in light of trademark law’s unwillingness to protect functional elements.

Assuming that the proposed judgment/injunction is given the green-light by the court (Judge Scarsi has not yet signed off on the parties’ proposed terms), it will bring the case to a swift close, almost exactly two months after it was first filed by Nike.

In its October 14 complaint, Nike argued that Lotas and his corporate entity were not only “promoting and selling fakes of coveted Nike Dunks” by way of its Warren Lotas X Staple Pigeon OG and Warren Lotas Freddy Broccolini Chanclas” sneakers (and thereafter, its replacement Reaper sneaker), the streetwear brand was “intentionally creating” confusion about the nature of the sneakers (i.e., whether they are “legitimate customizations or illegal fakes”), and “attempting to capitalize on” such confusion to sell its $300 infringing sneakers.