Visual China Group, one of the country’s largest photo agencies, has also come under fire this week for watermarking pictures of the Chinese flag.

Visual China Group — the country’s equivalent of Getty Images — apologized Friday and shut down its website after being criticized for selling public-domain images including those of China’s national flag and emblem, as well as the first-ever photo of a black hole.

In a statement posted to its Weibo microblog account Friday morning, Visual China Group, or VCG, said it had “removed the noncompliant photos” and voluntarily shut down its website “for rectification.” The company had reportedly met with cyberspace regulators in the northern city of Tianjin the evening before issuing its statement.

“The company will learn from these lessons, make earnest rectifications, and voluntarily accept the regulations implemented by the Tianjin internet information office,” the statement said.

The scandal was sparked by Weibo users who observed that VCG had watermarked the first photo of the black hole after it was released Wednesday night. Then on Thursday, the Communist Youth League questioned why images of China’s national flag and emblem could also be found in VCG’s database. Under that post, netizens and companies — including tech giants Tencent, Baidu, and Xiaomi — commented to say that images of their own watermarked logos had been added to the photo database without permission. 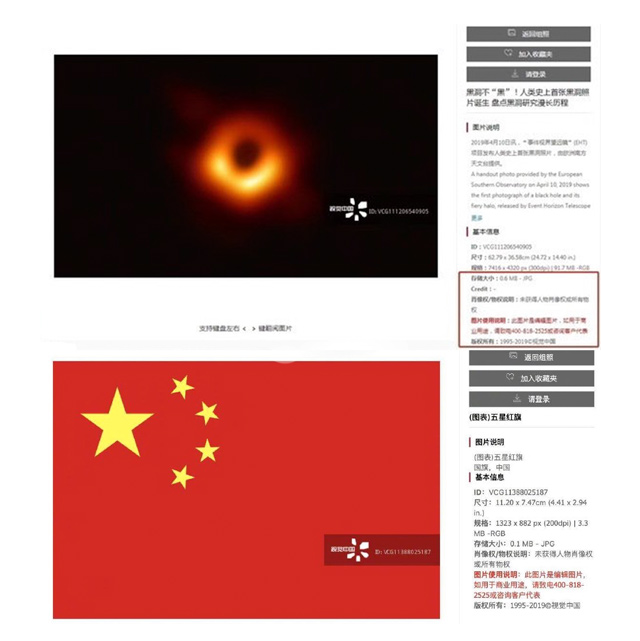 Screenshots of black hole and Chinese flag images with watermarks across them on the website of Visual China Group.

Following the Communist Youth League’s post, VCG issued a statement Thursday saying it had obtained nonexclusive rights to the black hole images from a partner institution, the European Southern Observatory in Munich — a claim the observatory denied in an email to Chinese media outlet National Business Daily. VCG also apologized for its images of the national flag and emblem, saying they had been provided by contributors and had not been properly screened before being added to the database.

Founded in 2000, VCG has over 40 million editorial images, 30 million creative images, and 1.25 million videos, according to its website. On Friday, the company’s share price on the Shenzhen Stock Exchange was 25.2 yuan ($3.76), having fallen the daily maximum of 10% from Thursday.

News of VCG’s missteps has gone viral on Chinese social media: A Weibo hashtag translating to “Visual China apologizes” had been viewed 290 million times by Friday evening, with many netizens accusing the company of profiting from unauthorized images. A photographer claimed that VCG had watermarked his photos without permission, and an actor alleged that the company had tried to charge her for using her own photo.

Chen Jun, a lawyer at Anhui Tianhe Law Firm who has represented VCG in intellectual property cases, told Sixth Tone that the company has won all of the copyright infringement cases he has handled for them and asserted that many of the company’s claims in the past have been valid.

However, Chen said that VCG has “no right to charge others” if it cannot prove it is the copyright owner or the licensee. “VCG can only claim its copyrights and accuse others of copyright infringement for photos that it creates, or that it has been granted an exclusive license to by the copyright owner.”

The black hole and national flag photos belong in the public domain, Chen said. As for the companies’ logos, he added, “VCG surely cannot claim such copyrights.”

Another intellectual property expert Sixth Tone interviewed went a step further, saying VCG may have violated copyrights and put itself at risk of being sued.

“For works that are neither proprietary nor authorized by the copyright owner, VCG certainly has no right to license them out, and the agency is not entitled to charge licensing fees — in fact, VCG itself may be guilty of infringing copyrights,” said Xu Xinming, an intellectual property researcher at China University of Political Science and Law. “Users who subscribe to VCG could sue the company for breach of contract.” (Sixth Tone is one such subscriber to VCG’s database.)

The website of another Chinese photo agency, Quanjing, was also inaccessible on Friday amid reports that it had been selling images of the country’s former leaders. And the same day, China’s National Copyright Administration announced that it would increase its efforts to protect image copyrights as part of a 2019 campaign to tackle online piracy.