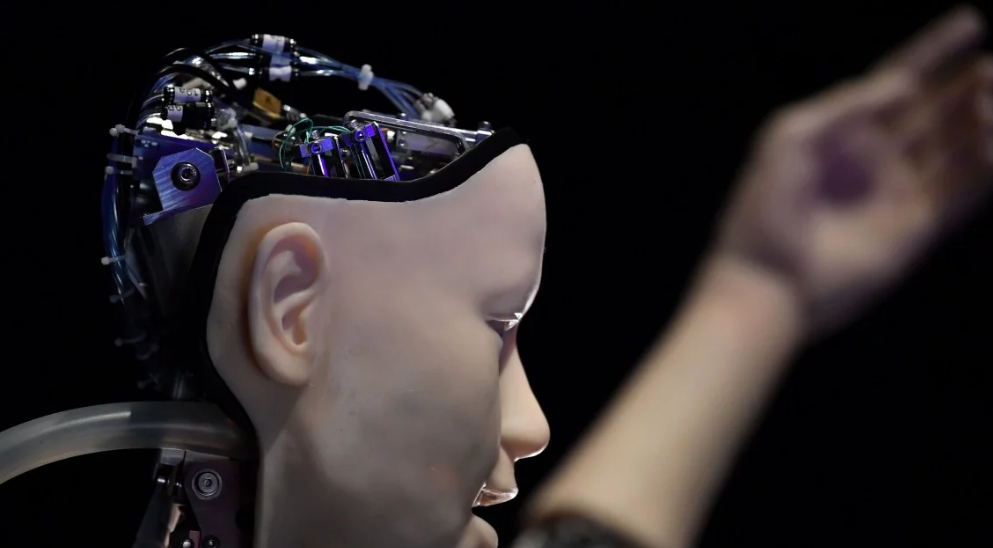 In this file photo taken on May 15, 2019, an AI robot titled “Alter 3: Offloaded Agency,” is pictured during a photocall to promote the forthcoming exhibition entitled “AI: More than Human”, at the Barbican Centre in London. Photo: AFP

Creating art is a common way for humans to express themselves – and it is usually protected by copyright laws – but what if artificial intelligence (AI) did the same? If a writer used AI to complete Cao Xueqin’s famous unfinished Chinese novel Dream of the Red Chamber, who should own the copyright? Cao Xueqin, the writer, or the AI algorithm?

“So far, there is no law specifically addressing ownership of AI-created work [in China],” said Liu Wenjie, a law professor at the Communication University of China. “The court can decide the authorship of the content by applying the general provisions of the law or by legal interpretation when there is a dispute. Of course, this can cause uncertainty. ”

Several legal experts who spoke to the Post agreed that artificial intelligence, at its current stage of development, should not be considered a “legal person” that can own a work.

“It would be quite problematic to give AI the right to own its work legally. To do that, you need to make the AI an independent legal person, which not only has legal rights but bears legal responsibilities,” said Jyh-an Lee, associate professor of law at the Chinese University of Hong Kong (CUHK).

There are signs that AI, which China has widely adopted for applications from surveillance to education, will be applied to the creative arts field as well. Earlier this year Chinese telecoms giant Huawei Technologies used AI software, together with human composers, to complete Franz Schubert’s eighth symphony, while Tencent, whose music service is No 1 in China, announced a partnership with AI music start-up Amper.

Spotify’s director of its Creator Technology Research Lab François Pachet also recently wrote on his LinkedIn page that he was developing “the next generation of AI-assisted music composition tools”.

Even so, there are complex legal issues when it comes to AI creating a work.

In the first known court case involving Chinese AI copyright protection, a Beijing-based law firm sued Baidu for infringement after one of the search giant’s platforms reposted a WeChat article by the law firm. Baidu’s defence was that the article was created by AI, so it was not protected by copyright.

The case was heard by the new Beijing Internet Court, which in April held that only works created by a natural person can be protected under copyright law, but added that authorship of the AI-created work in question should still have been protected by law.

“The court’s decision giving authorship to the user of the AI is only from the perspective of promoting cultural communication and the development of science, but it did not point to any legal evidence supporting it,” said Xu Xinming, chief lawyer of the China Intellectual Property Lawyers Net. “This was only a single case and a way for the Beijing Internet Court to explore the legal [dilemma], but the situation is far from mature.”

In most countries, AI-generated work is not subject to copyright protection so no one should own the work, noted CUHK’s Lee. “[I think] most copyright practitioners and scholars agree with each other on that.”

If a work produced by an AI algorithm or process, without the involvement or contribution of a natural person, does not qualify as authorship, it could create a vacuum in copyright law, argued lawyer Xu.

For now at least, AI companies are saying the technology will not replace human artists, but rather will help them create better work. However, there could still be disagreements over ownership. For example, if a musician uses Tencent’s AI software to compose a song, does the artist have complete authorship of the work or does Tencent?

Beijing-based Deepmusic, which claims to be the first AI music company in China, does not say in its publicly available information who owns the music created by its AI tools. Deepmusic did not respond to an interview request.

“It’s hard to define who owns the copyright [in this situation],” said Xu Ke, assistant professor at the school of law at the University of International Business and Economics. “If [the user] adds some original data in the process of using AI and produces some work that is different from others, then I think it should be owned by the user. But what’s hard to prove is whether they entered the original data.”

China’s policymakers are trying to address the problem. During the Two Sessions parliamentary meetings in March, National People’s Congress spokesman Zhang Yesui said authorities had put the drafting of new laws related to AI in the country’s next five-year legislative plan.

The US Patent and Trademark Office this month extended its deadline for comments on copyright and AI. One of the issues up for debate was whether a company that trains the AI process that creates a work can be the copyright owner.

Last year the European Copyright Society held a discussion on the legal status of creative works produced by algorithms.

Legal experts also differ over whether the lack of copyright protection for AI-created works will help or hinder the development of the technology.

“Without IP protection, we still have witnessed huge amounts of investment go into AI related projects. This somehow explains that IP is not necessary to incentivise AI works,” said Lee.

Lawyer Xu, however, argues that without proper copyright protection, AI development will slow. “I hope [the legal community] can address the issue soon,” he said.