Kanye West's Yeezy empire is prepping for its Cambrian explosion. But there's been one lingering problem: Walmart had opposed Yeezy's new brand, calling the proposed sunburst logo too similar to Walmart's own spark. 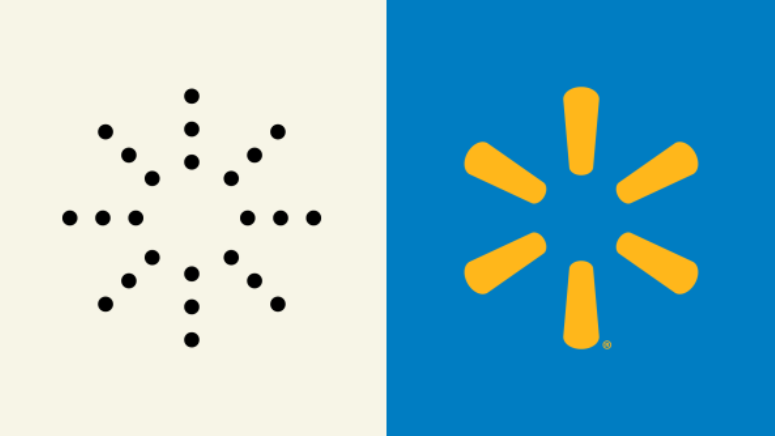 This week, we're tracking two major developments from the Yeezy brand. First, a Walmart spokesperson told Fast Company that the ongoing logo lawsuit has been settled. "The litigation ... was resolved a few months ago," they wrote. "The terms are confidential."

At the same time, Yeezy's own holding company has filed two trademark applications for a new logo that appears to replace the Walmart-contested sunburst. It's a pair of rings to be used on apparel and accessories ranging from infant sleepers to G-strings, and in connection with retail and online stores. "The mark consists of a fanciful design of two concentric circles," the application reads. "The circumference of the outer circle is represented by a fluted circular line, while the circumference of the inner circle is represented by a plain circular line."

While this is only a wireframe of the mark—and the full logo could be skinned in various colors, textures, and multimedia treatments—it's easy to speculate how this graphic fits into the greater Yeezy brand. Much like Yeezy's originally proposed logo, it's a paired back sun (or perhaps even an eclipse). At the same time, the shape reads like a badge that could be stamped onto apparel and other goods. I'm reminded of Nintendo's gold seal of quality that used to be printed on its retail packaging.

Historically, Yeezy has launched logos for branded partnerships with Gap and Adidas, while neglecting much traditional brand strategy on the greater Yeezy brand itself. Whereas Nikes are identifiable by their famed swoosh, Yeezy's Adidas shoes are typically adorned with minimal logo treatments, and instead are more readily identifiable by their striking silhouettes. However, Yeezy in is growth mode. Ye recently promoted Yeezy's famed shoe designer Steven Smith to head of industrial design at a related brand called Donda, showed off a design for a foam car, and filed a trademark for YZYSPLY retail stores. As Yeezy plots growth into new products and channels of retail, its logo will be an important tool to tie it all together—sooner rather than later.

"These applications were filed on an 'intent to use' basis. This means that the owner of the trademarks needed to have a 'bona fide intent' to use the trademarks with the items listed in the applications," points out Josh Gerben, the trademark attorney who first spotted this application. "Therefore, it is very likely that Kanye is developing plans to roll out this logo soon."