Although Zhang Dongliang is unknown to most of the public, the helmets he designed based on Peking Opera makeup styles were a hit when Chinese cyclists Gong Jinjie and Zhong Tianshi wore them at the Rio 2016 Olympic Games.

Unofficial imitations of the helmets were available via online shopping sites soon after the athletes won gold medals in the Women's Team Sprint.

Zhang told People's Daily newspaper that he will actively defend his rights when encountering such copycats in the future, as the designs have been copyrighted.

Zhang recalled that his studio, Incolor, received the order from the national bicycle team in April, thanks to Xu Chao, an athlete on the men's team who knows a friend of Zhang. The studio decided to add some traditional Chinese features in the helmet design.

"The members of my design team are all cycling fans ," said Zhang. "We know exactly the gestures of the athletes in the races and the angles of the cameras, so we decided to put the Peking Opera facial makeup patterns on the helmets."

The characters of the faces were chosen to reflect the characteristics of the wearers.

"We did not expect that the effect would be so wonderful," Zhang said.

He said the studio has established "close relations" with upper and lower stream companies, and their future focus will be not only on bicycle coating, but also tailor-made bicycles.

"As for our previous designs, which were copied by others, we will just let it go. But customizing bicycles will involve many core technologies and we will protect our intellectual properties from the start."

He was happy to see his studio sign an agreement with a digital copyright trade and protection platform at the sixth China International Copyright Expo, which opened last week in Guangzhou, Guangdong province. 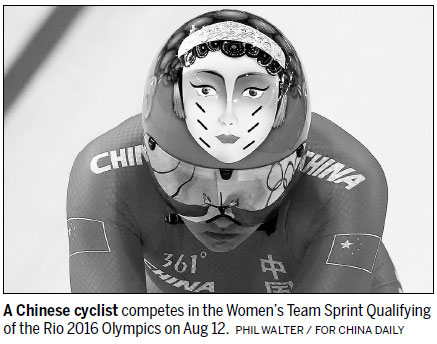